ABSTRACT BODY:
Introduction:
Sometimes, implants have to be tilted to avoid perforating the buccal cortical plate, the maxillary sinus or the mandibular nerve. There are, however, some concerns towards the non-axial loading of the implant and the more complex restorative procedure. This study evaluated the long-term outcome of tilted implants with an angulated connection at the implant neck.

Method:
During a 12-year period, 751 angulated impants (Co-Axis, Southern Implants, Irene, South Africa) were placed in 331 patients (180 female, 151 male). 138 (41.7%) were not included in the study for various reasons: 97 could not be located, 18 were deceased and 27 were not interested to participate. Within the limitations of the study, 7 implants were reported failures (0.9%). Data were extracted from the patients’ files and bone level was evaluated using a recent radiograph.

At 87 implants, some bone grafting was performed. In 31% of those cases, scraped bone was used, in 58.6% an anorganic bovine bone matrix (Bio-Oss) and in 9.2% autologeous bone from the hip was harvested. In only one case, some other type of material was used. In most cases (94.3%), an onlay graft was performed while in 5.7% of the cases, the bone graft was used to lift the sinus membrane.

Conclusion:
Tilted implants demonstrate a predictable outcome in various indications. No adverse effects from the non-axial loading could be detected. 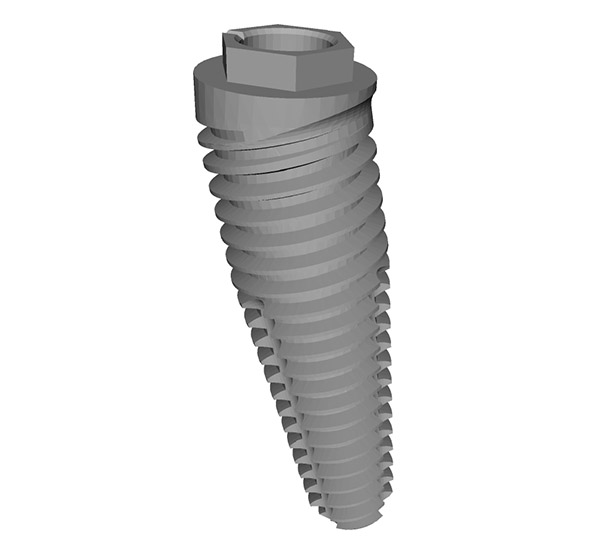 Image of the Co-Axis implant